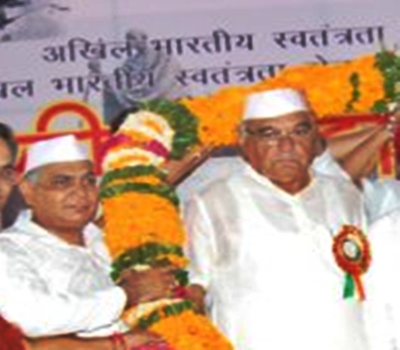 
The land in question 3.5 acre land in Shikopur, near Manesar which latter sold to Vadra’s company Sky Light Hospitality belonged to Mr. Satyanand Yajee and his Wife Godavari Yajee who was former General Secretary of All India Freedom Fighters Organization than headed by Late Sh. Ranbir Singh Hooda, apart from this both shared long family relations since the days of Late Sh.Ranbir Singh Hooda and Late Sh. Sheel Bhadra Yajee who had worked together in parliamentary politics.

Also for consideration that, All India Freedom Fighters Origination first headed by Late Sheel Bhadra Yajee father of Mr. Satyanand Yajee and than by Late Sh. Ranbir Singh Hooda, father of Chief Minister, Mr. Bhupinder Singh Hooda and after them Mr. Hooda and Satyanand Yajee have taken command of this organization and its sister organization, All India Freedom Fighters’ Successors’ Organization claimed to working for betterment of Freedom fighters and their families all across the country had issued full pages advertisements to newspapers when Late Sh. Ranbir Singh Hooda died in February 2009.

As per IHN investigation Onkareshwar Properties, a private limited company incorporated with Registrar of Companies in 2004 which sold its 3.5 acre land in Shikopur, near Manesar, to Sky Light Hospitality in February-March 2008 for Rs 7.5 crore.

It is to remember that this land deal done by Mr. Robert Vadra was beginning of Vadra-DLF business association which never looked back after this and created many more latter on.

Further, investigation established that the land which was sold by Onkareshwar Properties to Vadra’s Company Sky Light Hospitality in February-March 2008 for Rs 7.5 crore was in names of Mr.Satyanand Yajee and his wife Godavari Yajee.

It is to mention here that Mr. Satyanand Yajee son of freedom fighter Late Sh. Sheel Bhadra Yajee is former general Secretary of All India Freedom Fighters Organization then headed by Mr. Bhupinder Singh Hooda son of freedom, Both families are close to each other since days of Late Sh.Ranbir Singh Hooda and Late Sh.Sheel Bhadra Yajee, both freedom Fighters Struggled to get India Free from British rule.

Also, in comes in picture in 2005, when Anil and Gautam Bhalla, father-son duo of Vatika Group, acquired 5,000 shares or a total consideration of Rs 1 lakh, the Vatika Group has developed a plotted colony in Ambala city.
On Feb 18, 2008 Satyanand Yajee & Sandeep Dahiya become directors of Onkareshwar Properties just before it sold land to Sky Light Hospitality Company, it’s clearly established that Onkareshwar Properties could able to sell Vadra only after it was guaranteed that Mr. Satyanand Yajee , becomes director in it in lieu of his land which was in his and his wife name before Vadra-DLF nexus.

As per latest ROC records of Onkareshwar Properties ,Mr.Satyanand Yajee owns 98 percent shares, remaining 2 per cent are with his wife Mrs. Godavari Yajee.

Last not the least this deal mentioned in Vadra’s Company RoC Return mentioned that over draft facility of Corporation Bank was availed to pay the Land deal of Rs 7.5 Crore but later bank clarified that it had not over drafted the amount, and now established that Onkareshwar Properties owned by Mr. Satyanand Yajee did not present cheque of Rs 7.5 crore issued by Sky Light Hospitality to Onkareshwar Properties in lieu of 3.5 acre land purchased by Vadra.

Which means, there was some understanding between Onkareshwar Properties (Satyanand)-DLF to bring Mr. Robert Vadra into this land deal by luring him of earning crores without investing nothing and Mr. Vadra did this because of his lust for money, whereas, DLF got its ways clear to expand its business in Haryana under present Government led by Mr. Hooda, further it deemed in Haryana Government officialdom that Congress High Command has been apprised of this development and game of land deals started in Haryana.
Some Facts about Onkareshwar Properties:
To Know More About Mr. Satyanand Yajee and Mr. Bhupinder Singh Hooda Association visit: www.aiffo.org

This shocking for me as i have high regards for our freedom fighters and have participated in its function in which Mr. Bhupinder Singh Hooda was Chief Guest and Mr. Yajee was Host of that function in 2008.

This is a post syndrome of over capitalism approach adopted by Haryana State under Present Mr. Hooda government, where progress of the state is only manifested in term of GDP or GNP.

Every Person either in politics or in bureaucracy especially ( in Town and country Planning department) have become real estate brokers or floated their own companies in land deal business at cost of farmers or poor land holders in NCR in special and Whole of Haryana in general.

Money lures every one in capitalist system including the families of Freedom fighters also, but it shocks everyone  who has high regards for these families.

Chandigarh (I-Haryana News): The Whistleblower in Haryana Bureaucracy, Dr. Ashok Khemka served nearly six years in Land Revenue Management in different official capacities and made his tool to fight his war against corrupt political system once he was posted as Director General, Consolidation Land Holdings by exposing corrupt practices of politico- bureaucratic-Nexus as he has done in case of Mr. Robert Vadra and others.

The tolerance limit of IAS officer of 1991 Haryana cadre has reached at its optimum level after he got his transfer order on October 11, 2012 from the post of Director General of land consolidation and land records to Haryana Seeds Development Corporation as MD, a post for 12 year junior IAS officer.

Mr. Khemka’ latest transfer order was stated to because on October 8, 2012, he has ordered a probe over all land deals of UPA Chairperson Mrs. Sonia Gandhi’s Son-in Law, Mr. Robert Vadra alleged corrupt land deals in NCR and also cancelation of land mutation in DLF name which was sold by Vadra to it in Manesar on last day in his office, i.e. 15/10/2012 as Director General of land consolidation.

The IHN Team Researched on Mr. Khemka’s 40 Transfers during his 21 years service tenure in Haryana Government.

Dr. Ashok Khemka, PhD in Computer Science born on 30/04/1965 in West Bengal clear Indian Administrative Services examination in 1991 and allotted Haryana cadre in same year got his first posting in as Sub Division Officer (Civil) on 01/09/1993 and remained as such till 1994 and acquired experience in Land Revenue Mgmt & District Administration and Sub Divisional Administration there after he was transferred 40 times.

If we further see the detail of his transfers, it is evident that he was transferred twice as compare to other IAS officers of 1991 Batch of Haryana cadre, following is the compare chat of all nine officers:
Source: ABCNIS
For Complete News Visit Intelligent Haryana News

Transfer of officers is prerogative of government and implementation of Judiciary's order two things which re alwys in government domain but booth should not be use as a tool to punish the honest officers as in case of Dr. Ashok Khemka was done.

As he  ordered Inquiry into land deals done between Mr. Robert Vadra-DLF and Registered in NCR of Haryana on October 8, 2012 and his transfer order was issued on 11th October , 2012, just two day after inquiry was ordered.

As News report published by IHN manifested that he suffered most at the hands of chautala and hooda because he never surrendered before them as most of bureaucrats have done to get plum postings, the research conducted by IHN team established.

My Good wishes for great work dome by IHN team on Dr. Khemka work as a bureaucrat.
Posted by drawat123 at 11:07 PM No comments:


As per documents with Intelligent Haryana News that Mr. Robert soon after congress government led by Chief Minister, Mr. Bhupinder Singh Hooda came into power in 2005 started to keep eyes on this village located on bank of Yamuna river and purchased the first piece of land on 03/03/2008 measuring 9 acre falling under Khasra number 122/8, 123/6 from Gurgoan based Mr. H.L. Pahwa son of Sher Singh Pahwa vide registration number 4781 for Rs 3,690,000/-

After this he acquired more than 66 acres of land initially allotted to members of Scheduled castes at subsidized rate in Village Hasanpur in his or his close confidents and his different companies names as follow:
It to mention here that land now under Mr. Vadra and his different companies have been covered by a high wall  which was onace allotted to Scheduled caste land less persons in village Hasanpur.

When IHN team asked all those persons belonging to Scheduled caste, who were allotted subsidized land in 1981 that how they lost their land ownership in the village, most of them named local property dealers names, mainly Mahesh Naggar, brother of Congress leader Lalit Naggar, who had played crucial role in duping dalits land owners to sell their land to non-Scheduled Caste persons (As per land allotment letter only land could be sold to Scheduled Caste persons) by luring them financially because of backwardness of this village till Mr. Vadra purchased land.

The villagers told IHN that village seen rapid infrastructure development once Mr. Vadra completed his land purchase exercise, resulted into sudden price hike due to development works started by Haryana Government courtesy Mr. Vadra, shocked all dalits who had by then already sold their land to Mr. Vadra and his companies at throwaway prices felt cheated.

Haryana Chief Minister, Mr. Bhupinder Singh Hooda who was handpicked by UPA Chairperson, Mrs. Sonia Gandhi to lead congress government in the state in 2005, ignoring Late Bhajan Lal had little window to established direct contact with her, and he had to use all possible routes and persons to make access to Mrs. Gandhi /

Mr. Hooda's dependency on all persons around Mrs. Gandhi was his compulsions to survive, slowly and steadily he reduced the number of persons to whom he has to please at all cost with passage of time, but Mr.Robert Vadra was essential thus he bowed to his wishes and did as desired.

Now Mr. Hooda is in deep crisis as balloon carrying Mr. Vadra business Shortcuts have started to hamper the existence of his political throne as well as Congress Party Led by Mrs. Sonia Gandhi.

How to Mitigate the Toxicity Level in Human Body?

The rapid urbanization and its shortcuts  lifestyle  have sharply hiked the toxicity level in Human Body thus created a situation where na...

Read My Blog in Your Mother Language

Change is an Universal Truth, Always Be Ready to Face It

Gandhi My Guru Quote of the Day

"I believe in equality for everyone, except reporters and photographers." Mahatma Gandhi